Spinach Health Benefits: Why it is called a Super food? - Kare Your Health
Skip to content
Health Vegetables

Spinach Health Benefits: Why it is called a Super food?

If you do not have spinach in your food, then you are making a big mistake and inviting many serious diseases. There are so many health benefits of spinach that you will be surprised to know. The reason why spinach is called a superfood is that it is loaded with minerals, proteins and is absolutely fat-free with zero cholesterol.

Why spinach (vegetable) is called a superfood?

There are many other benefits of eating spinach, which keep it in the superfood category. Vitamin A and potassium are in abundance which acts as a panacea for our eyesight and blood pressure. It is rich in antioxidants and dietary fiber. If you add to your regular diet, you can keep your heart perfectly fit.

Therefore, many other diseases can be overcome by using spinach in your regular diet. Now let us understand in detail what are the nutrients in it, but this vegetable is in the category of a superfood.

Spinach is one of the green leafy vegetables. Loaded nutrients and antioxidants, Spinach is used in many ways in food. Apart from vegetables, it is also used in making soups, juices, and dishes. Generally, spinach is available in every season throughout the year, but it is found in abundance in the winter season.

Spinach is a good source of vitamins, minerals, and phytonutrients in addition to iron. Eating spinach has many health benefits.

Many diseases related to the kidney and heart arise due to hypertension or high blood pressure. Eating spinach reduces hypertension. Spinach is also beneficial in reducing stress and anxiety. Nutrients found in spinach keep the sodium in check with the help of potassium.

As we know spinach is highly enriched with potassium and it is very much an essential mineral that maintains blood pressure levels.  Vitamin C present also helps in neutralizing hard metals and helps potassium in removing hypertension.

We should know that spinach is one of the best green leafy vegetables for sugar patients. The antioxidant found in it, called alpha-lipoic acid, controls the glucose level in the blood. It balances the level of insulin and helps a lot in controlling the oxidative changes caused by stress in diabetic patients.

Eating spinach may protect from cancer

Spinach is rich in phytonutrients called flavonoids, which protect us from cancer. It reduces the level of broken cells of the stomach and skin and reduces the risk of skin cancer other than the stomach. Apart from this, spinach is also very effective in fighting prostate cancer. Due to this, our body is saved from getting hit by a major chronic disease like cancer.

This is possible because there are spinach and some such green vegetables in which the amount of chlorophyll is found. In a 2013 study on about 12,000 animals, it was found that chlorophyll significantly controls the carcinogenic effects that cause cancer. That’s why we need to keep using Spinach in our diet. 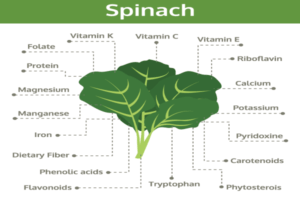 Spinach is good for Hair and Skin

As far as vitamin C is concerned, we know that vitamin C plays an important role in the formation and maintenance of collagen in the body that provides the structure of skin and hair. Vitamin A is important for any cell and tissue of the body, so if we have to keep our hair and our skin healthy, we must include it in our diet and give priority to Spinach.

Improves Brain Health and its Functionality

A study was done in about 1000 aged people and it was seen that those who used daily 1-2 servings of spinach in their diet, it was found their cognitive decline and memory loss decreased and their cognitive ability and behavior got improved as compared with those whose were less than 11 years of age with them.

Therefore, for those people who have started turning 50, it would be beneficial to include Spinach in their daily diet.

Spinach contains vitamin K which strengthens bones. One cup of steamed spinach contains about one thousand percent RDA of vitamin K, which slows down and controls the over-activation of osteoclasts. These are cells that weaken the structure of bones. Vitamin K increases the synthesis of a protein called osteocalcin. It is very important to keep bones strong. Spinach also contains calcium, which prevents osteoporosis.

Spinach contains sufficient amounts of bioactive and phytochemicals that eliminate oxidative stress in the body, protecting our DNA from damage. And even it has been seen that it also affects the gains, making the metabolic process healthy. That’s why it is also called Functional Food.