Sweets made from sesame are widely eaten a lot during the winter season. These days, from til ladoos to salad toppings, we use it in some form or the other in every dish. After all, eating sesame seeds provides many health benefits.

Nutrients like protein, calcium, manganese, vitamin E, and fiber are found in very good amounts, which are effective in getting rid of problems related to the heart, stress, and diabetes. It also proves beneficial in reducing the risk of lung cancer, colon cancer, and breast cancer. It is because of all these health benefits that sesame is discussed in Ayurveda for thousands of years. In Chinese medicine, sesame seeds are being used very prominently.

It is known to all that cholesterol is called a silent killer, which is a major cause of heart disease. Often we do not know how many levels of cholesterol (bad and good) should be in our bodies. We unknowingly keep eating fried and fatty foods with great pleasure. This is when you know that you start having problems and through a lipid profile test it is found that your cholesterol level is increased.

There has been a tradition in India for centuries to consume sesame seeds and their oil during the winter. Whether it is consumed on the arrival of the New Year or on Vaisakhi and Makar Sankranti, it has great importance. 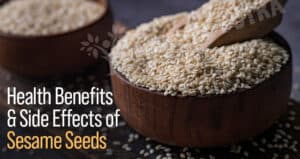 In a research, a study published in Nutrition Research, sesame seeds are helpful in controlling bad cholesterol and high triglyceride levels. Actually, sesame contains monounsaturated fatty acids, which are known to reduce cholesterol from the body and controls inflammation. Not only this, it proves to be a panacea in many other diseases.

Let us know and understand how Sesame seeds control cholesterol and reduce fat from your body?

How does it work?

According to studies, consuming 2-3 teaspoons of sesame seeds daily helps in controlling lipids. It lowers LDL cholesterol by 8-16 percent and total cholesterol by 8 percent. Since the amount of fat in sesame is very high, many studies have recommended consuming sesame instead of calories in your daily diet.

Sesame is rich in nutrients, but it is always suggested to consult a nutrition expert before making any dietary changes to avoid any side effects.

Side effects of Sesame Seeds

We should know that too much of anything is very bad and this also applies to Sesame Seeds. As much as it has infinite benefits, it can also do harm if it is taken excessively or more than necessary.

You may have some health problems and sometimes it can prove fatal. Let us know what happens due to excessive use of Sesame Seeds. 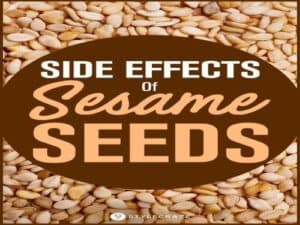 If you want to use Sesame Seeds in specific diseases, then it would be better to consult with your health experts or doctors.