Usually, the main symptom of a migraine is an intense headache. A migraine headache is a complex disorder characterized by recurrent moderate to severe headaches and often accompanied by several autonomic nervous system-related symptoms.

The headache usually affects one area and is tingling in nature, which lasts from 2 to 72 hours. In some cases, the pain can be on either side of the head and may afflict your face or neck.

According to Ayurveda, changes in Vata, Pitta, and Kapha doshas due to diet and lifestyle lead to disease with different symptoms. The problems of migraine headaches are directly related to neurology and its increases when there is an increase of Vata in the body.

Migraine headache: Its causes, symptoms, and methods of prevention

It is normal to have headaches due to overwork, stress, or some other conditions. But it is not right to take every headache as normal; some types of headache can also be the cause of migraine. Migraine is a special type of problem in which people can have a severe headache along with some other symptoms such as nausea-vomiting, sensitivity to light, and sound. The problem of migraine can occur at any age, so it is important for all people to be careful knowing about its symptoms. 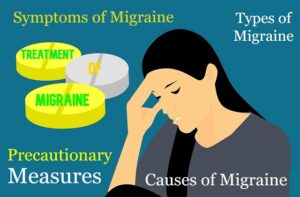 According to doctors, the normal life of people can be affected due to migraine. Some people may have frequent migraine problems. In a 2018 study, researchers found that more than 15 percent of adults in the United States suffer from migraine problems.

In 2015, it was found that 19 percent of women while 9 percent of men are at risk of having this problem. Some people may also have this problem genetically. Let us understand in detail the problem of migraine herewith.

What are the symptoms of migraine?

According to doctors, the problem of migraine can occur in many stages, on the basis of which its symptoms also differ. In general, people may experience such problems in migraine.

Headaches caused by migraine are identified by ‘aura’. Auras are visual disturbances, in which the patient sees an intermittent bright light, zig-zag lines, dark spots appear before the eyes, prickling of the skin, and weakness. Symptoms include dark circles under the eyes, anger, irritability, pain in one side of the head, etc.

Headache that gets worse gradually. In many people, the problem of pain can occur around the eyes along with the head.

Migraine pain most commonly affects the forehead area. Apart from this, it can shift to one side of the head or both. This type of problem gets fixed in 3-4 hours. In some people, it can persist for a few days.

Doctors say that the problem of migraine can be due to different reasons. Although it is thought to be genetic, there are other conditions that can trigger a migraine.

According to health experts, the risk of migraine also increases due to hormonal changes during menstruation in women. The following triggers are responsible for migraine headaches.

Stress, depression, anxiety, and excitement can also promote migraine. Many studies have found that people, who consume more alcohol, caffeine, chocolate, etc., may also have a higher risk of migraine. 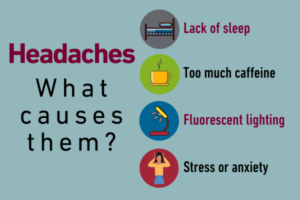 Most notably, a variety of environmental factors such as flickering screens, strong smells, loud noises, changes in temperature, and bright light can also cause migraines. The imbalance of Serotonin may play a vital role in triggering migraine headaches. If there is an imbalance or if Serotonin comes to the lower level then you go into depression, intermittent headache, and migraine.

Read also: Imbalance of Serotonin may cause Migraine Pain

A migraine headache can also be triggered by;

What is the treatment for migraine?

Doctors say that although there is no specific treatment to cure the problem of migraine, yet the patient is given some kind of pain reliever or medicines to stop vomiting, which can give them relief. Many people get relief from this problem by sleeping in a quiet and dark room.

How can I prevent migraine?

According to doctors, people who keep having problems with migraine should try to identify the triggering factors and stay away from them. Migraine can be avoided by using habits like getting enough sleep, reducing stress, drinking lots of water. By exercising regularly, you can also stay safe from this problem to a great extent. If you have any unusual problem during the time of a migraine, then definitely consult a doctor about it.

Some tips to prevent migraine headache